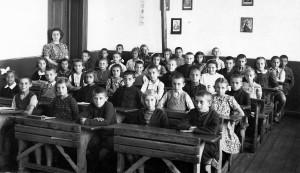 The school, which now nobly bears the name of the Miladinovi brothers, opened its doors for the first time on 24 May 1911. At that time it was located in the so called Summer district in Ruse. On 12 January 1912 it was given a name after the two brothers Miladinovi, because they contributed with a nib and patriotic ideas to the Liberation of Bulgaria from the Ottoman Yoke.

The two brothers were born in the town of Struga, Macedonia. They both graduated „Classic Philology“ in Athens, Greece which was considered prestigious at that time. Their main activity was collection of Bulgarian folk cultural artifacts which were later summarized in a book called „Bulgarian folk songs“, released in 1861. The book soon spread throughout Bulgaria and became hugely popular – everyone wished to read it and copy it.

Miladinovi brothers advocated for a conservation of the Bulgarian spirit during a time of slavery.

In 1931 to the school building was added a second floor and in 1943 it already had its own banner made by the teacher Lukan Tsokov.

On 8 March 1973 the new school building was inaugurated. On its four floors there were a total of 9 classrooms and 3 cabinets.

According to a government decree No 1671 dated 14 May 1986 elementary school „Bratya Miladinovi“ was awarded the „Cyril and Methodius“ first degree state medal and in 1987 it received the honor of excellence title „Model school“ – the only general school in Ruse with such recognition.

Today our school is spacious, clean and welcoming. In the classrooms work teachers, dignified for their job. Full of renaissance spirit they share knowledge and life wisdom with their students. Children, educated by our teachers, have successfully found their place in the modern society.

All of them are working towards the achievement of the greatest aim – to share knowledge and skills, to teach students of positive virtues and prepare them for the challenges of 21 century. Our students are highly-educated, sharing European values, but not ignoring the national and general human values.

The teachers at „Bratya Miladinovi“ school are glad to hear „Thank you, teacher!“ which is enough to keep on moving forward.

The school has its own medical and dental cabinets, working exclusively with the pupils.

Dimitar (1810-1862) and Konstantin (1830-1862) Miladinovi were born in the town of Struga, on the Ohrid lake, in a family of a craftsman. Dimitar started studying in a Greek school in Ohrid and later moved to a school in Ianina, Greece. As a teacher he held classes in Ohrid, Struga, Kukush and Bitolya, establishing schools there and making reorganizations in the school programs. Simultaneously he was fighting against Hellenism in Bulgarian schools.

His little brother Konstantin studied in Struga, Ohrid and Kukush and later was enrolled in the Ianina Gymnasium. In 1849 he moved to Athens and graduated „Classic Philology“ there. Later on he fulfilled his dream to continue his education in Russia. He spent five years in Moscow studying „Slavic Philology“ in the Moscow University.

Chased by the Greek Clergy he shared the tragic destiny of his brother. Someone reported Dimitar to the Turkish authorities as being a Russian spy, he was arrested immediately and put in an Istanbul jail where he died in 1862. When Konstantin learned about the detention of his brother, he left for Tsarigrad (i.e. Istanbul) to fight for his freedom. There he was also detained, put to jail and soon died.

Their educational work and tragic death turned the two brothers into key players in the history of Bulgarian cultural movement and the struggle for Independence during 19th century. The brothers are also famous for their interest in Bulgarian folk art and their work „Bulgarian folk songs“. Both of them realized the importance of folklore during the Renaissance period and did all they could to collect the best poetic works of art that Bulgarian people have created for centuries.(Author: Penka Krasteva – a teacher in History)

I am a little Miladinovs’ son and I know,
I am the tomorrow
of our town and I dream –
to give everything I can to it.

With much love, work and resilience
I’ll make my town famous,
everything here is valuable for me,
every road here is familiar.

Native past, heroes
along the big river –
for me they are alive, mine …
I always wish to remain like this.

I am a little Miladinovs’ son and I know,
I am the tomorrow
of our town and I dream –
to witness its rebirth.

Elementary school „Bratya Miladinovi“ – Ruse has been working with projects since 2002. Some of them are:

Project title „Salvage of 50 000 Jews during WWII in Bulgaria“.

Participants – „School under the trees“, Berlin and ES „Bratya Miladinovi“ – Ruse, as well as NGOs.

Project description: Youngsters from Ruse and Berlin became familiar before and during the youth exchange in Berlin with the destiny of Jews, gypsies and sinth people during and after the WWII in Germany and Bulgaria. Interviews were made and studies recorded on video. Thus movies were created which could be played in schools for educational purposes. An important point is what young people can do themselves in their schools and their environment against the antisemitism and anti-gypsy prejudices.

The school offers many and various extracurricular activities to the students. They participate in competitions in a lot of sports like basketball, volleyball, handball, table tennis, chess and football. They also take part in all student games, in „Fox Kids“ tournaments, in Christmas mini-football tournament. Our school is always very well represented on such events as sports orienteering and the municipal mass-cross.

The school student council has been established in 2000 / 2001 as a form of students’ self-governance. Establishment, participation in SSC, its structure and functions are determined by the Council’s charter and its own regulations and activity.

Student self-governance gives pupils a chance to improve their communication skills, to overcome problem situations, to make decisions and taking responsibility. SSC has been established to represent and protect students’ interests. It proved to be a partner to the school’s officials in finding solutions to students’ problems, as well as in stimulating, organizing and support of students’ creative expressions.

First prize winner in the municipality for 2006 / 2007, and always in the top three rank in municipal, regional and zonal competitions. Team trainer is Mr. George Draganov – a teacher in physical education and sport.

The volleyball girls team under the guidance of the teacher in physical education and sport Kliment Brachkov won in 2006 top prizes in municipal and regional competitions. Coach: Kliment Brachkov. 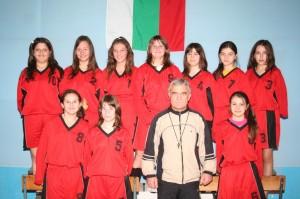 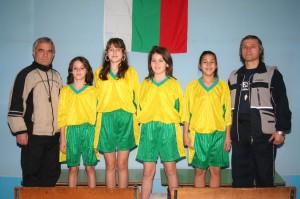 For seven years already the students of ES „Bratya Miladinovi“ have been studying dance sport with great desire and inspiration. Dance is drawing with its magic brush of movement star dreams, turbulent youth and unbridled joy. Dance is drawing in children souls gentleness, beauty and finesse.

Unforgettable for students will be the joyful memories and emotions experienced with the temperamental rhythms of Latin dances.

Since 2002 / 2003 students in „Bratya Miladinovi“ school have had the chance to study choreography under the guidance of the choreograph Magardich Astihigyan. Since 2003 / 2004 the study is provided under a special curriculum with additional hours for choreography.

The little dancers, who learn with great eagerness, are the future generation of the famous ensembles in Ruse like „Nayden Kirov“, „Ruschukliyche“, etc.

In 1987 / 1988 ES „Bratya Miladinovi“ introduced an organized form in maths teaching – open to every student preparation classes under the guidance of Sevdalina Milanova – a teacher in Maths.

The aim was to provide help to students sitting for exams, participating in competitions and Olympiads in order for them to easily articulate their logical thoughts when solving mathematics problems. Thus students can realize their individual capabilities at their best.

That extracurricular form of studying facilitates, stimulates, enriches and raises the interest and intelligence of students in mathematics, giving them a new level of self-confidence and assurance in achieving excellent results when participating in contests or having an exam. A proof can serve the top places in such mathematics contests as „P. Hilendarski“, Christmas, Easter, European kangaroo, etc.

Students, participating in the group for extracurricular courses in Bulgarian language and literature has shown profound interest in the subjects.

The aim here is to open the „secret vaults“ of literature, to look inside, to feel it not only for the purpose of knowledge and delight, but also as an artistic experience.

During classes language culture is improved through drills, tasks and tests, analysis of literature texts, revelations and observations.

The additional lessons help students in their preparation for admission in language and professional schools.

The program in Component 7 for prevention of HIV / AIDS is a wonderful initiative. It filled the existing gap of lack of student education in the field of their emotional and sexual communication.

By means of interactive methods, empathy for example, living through various incidents and cases, students are pondering over eventual negative effects for their personalities. To live and survive in the modern society, a man has to combine many features and fulfill various responsibilities, learn to stand for his/her own rights and interests, while respecting the rights and interests of the rest, to become aware that the danger of being infected with AIDS and other diseases is under his/her own control and its up to him/her to have or not risky sexual relations.

Thanks to the sessions, students learn to think, become more tolerant, sensible and responsible to them and to the rest. 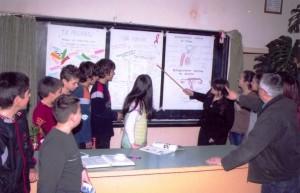 Club „Save the Bulgarian“

The informal club „Save the Bulgarian“ was established in the beginning of 2006 / 2007 year. Its activities are aimed at patriotic education of youth. Club members take care of local monuments and promoting the knowledge for various historical events among students. 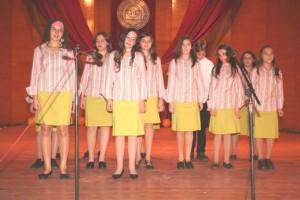 In ES „Bratya Miladinovi“ we traditionally have a vocal group. There with great inspiration sing students from 5th till 7th grades. They also participate in all school festivities. Songs they thing are modern.

Every year they participate in the festival for school art in the town of Ruse.

The group also took part in a joint project between ES „Bratya Miladinovi“ and ES No 4 „Mihai Eminescu“ – Giurgiu, Romania. In two years time students from both schools sang songs in Romanian and Bulgarian, which brought connections between them even closer. 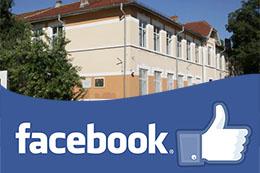